Having a knitting sort out

Something that is really hard to do with a toddler around is having a good sort out of knitting stuff – LO absolutely loves “helping” with anything, but the last thing I needed was a toddler in a knot with a pile of yarn and waving sharp things around. With the result that I had a large pile of things thrown into bags as I’d finished projects but never sorted them out. Well, one evening I unexpectedly got two hours to myself and seized the opportunity to get it all out! I’m the sort of person who likes things to be planned and organised, which becomes difficult once there’s a toddler around.

I emptied out all my project bags, put away needles where they were supposed to be, sorted patterns into piles and put away the ones I’d finished with. Wound up oddments of yarn for my odds and ends bag. Ate chocolate and drank tea whilst I was doing this.

The yarn diet took a bit of a hit(!) in August after I discovered a half price sale in Daniels department store in Windsor. They had merino (Debbie Bliss Rialto DK) in my favourite colour for sale, so, well, I bought 12 balls of it. This has just been stashed (I know, I know) as I don’t currently have a plan for it but I was incapable of resisting the lure of the purple yarn.

And, of course, my birthday yarn needs to be added to the stash in totals – another 790 metres…

Although I have finished another project – the Alpaca Tweed Chunky Jumper, which used up 6.4 balls of Stylecraft Alpaca Tweed Chunky (884.5 metres). This was yarn I bought last year when our local haberdashery closed down. It was fun to knit and I’m really pleased with the finished result as I think it will get a lot of use now the weather is a bit colder. I’m also glad it hasn’t languished in the stash for too long. I think I’d knit the pattern again too. 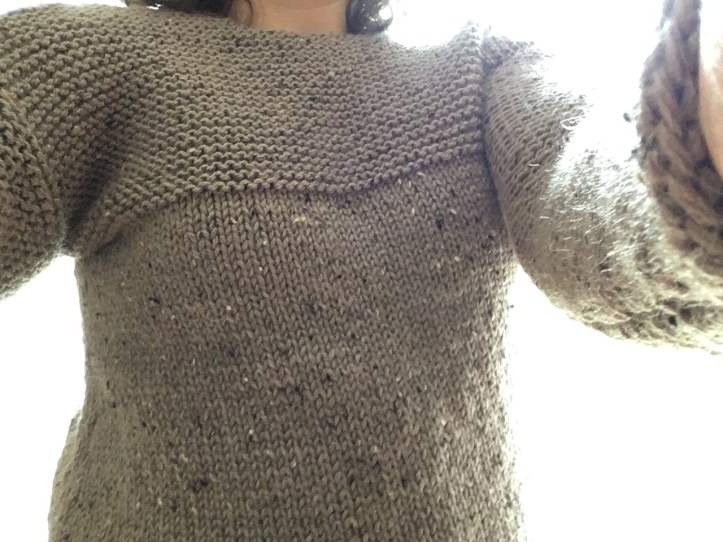 I had been mostly knitting from stash because of high childcare costs, which I thought would come to an end once LO turned three and the 30 hours a week of free childcare kicked in in 2019, as we currently pay for 34.5 hours a week. Except, surprise surprise, it turns out that this isn’t anywhere near as good as the politicians made out (look at Champagne Nurseries, Lemonade Funding), and, although it will reduce our childcare bill a little, it will still be pretty big as we’ll still be paying for 18 hours a week during term time and 34.5 hours a week during school holidays, cost averaged out so we pay the same amount per month (at that point my head nearly falls off)… Hmm.

Have you enjoyed having a knitting sort out recently?